The map below highlights the Focus Areas identified for the UTSA Area Regional Center. To learn more about each of the four focus areas, click on the animated targeted circle. 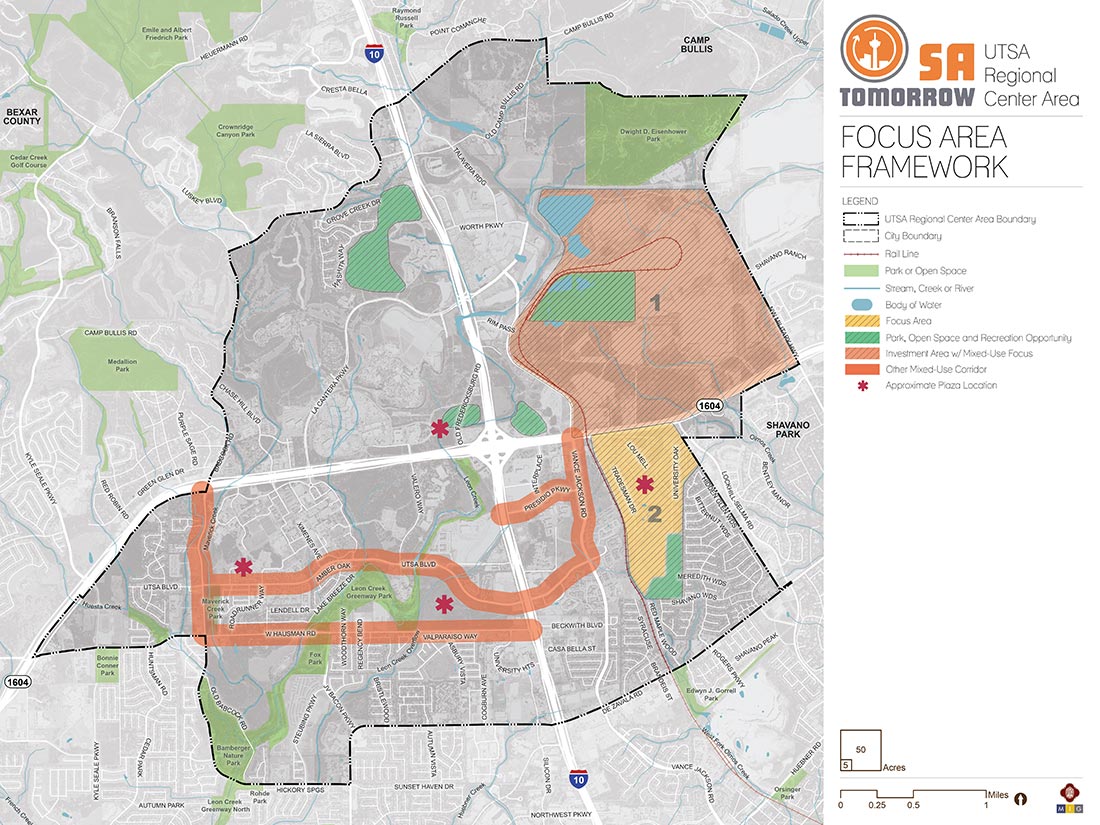 Focus Areas have development or redevelopment potential and offer unique opportunities to realize the community’s vision for accommodating growth and change. The UTSA Area includes a significant amount of vacant land; however, much of it is part of phased development plans where construction is already underway. Therefore, the UTSA Area project team concentrated on areas that are likely to change use and character in the future, as well as major corridors that have potential for mixed-use development and improving connectivity throughout the plan area.

Two focus areas and two clusters of mixed-use corridors were identified through discussions between the project staff, the Planning Team, and the community: the Beckmann Quarry site in the northeast quadrant of the plan area; the Tradesman Quarry and the surrounding industrial/business park located south of Loop 1604 at Lockhill Selma Road; the UTSA Boulevard, Vance Jackson Road, and Presidio Parkway corridors between Babcock Road and Loop 1604; and the Babcock Road and West Hausman Road corridors from Loop 1604 to I-10.

Ensure focus areas, mixed-use corridors, and area amenities are easily and safely accessible by all modes of travel, including pedestrian, bicycle, and transit options.

Ensure that new and infill development is organized around existing and proposed open space and trail systems to preserve green space, increase recreational opportunities, utilize greenspace for stormwater management and increase connectivity within the trail system.

Encourage new development and infill projects to contain a mix of uses that will serve as residential, commercial, and entertainment destinations. 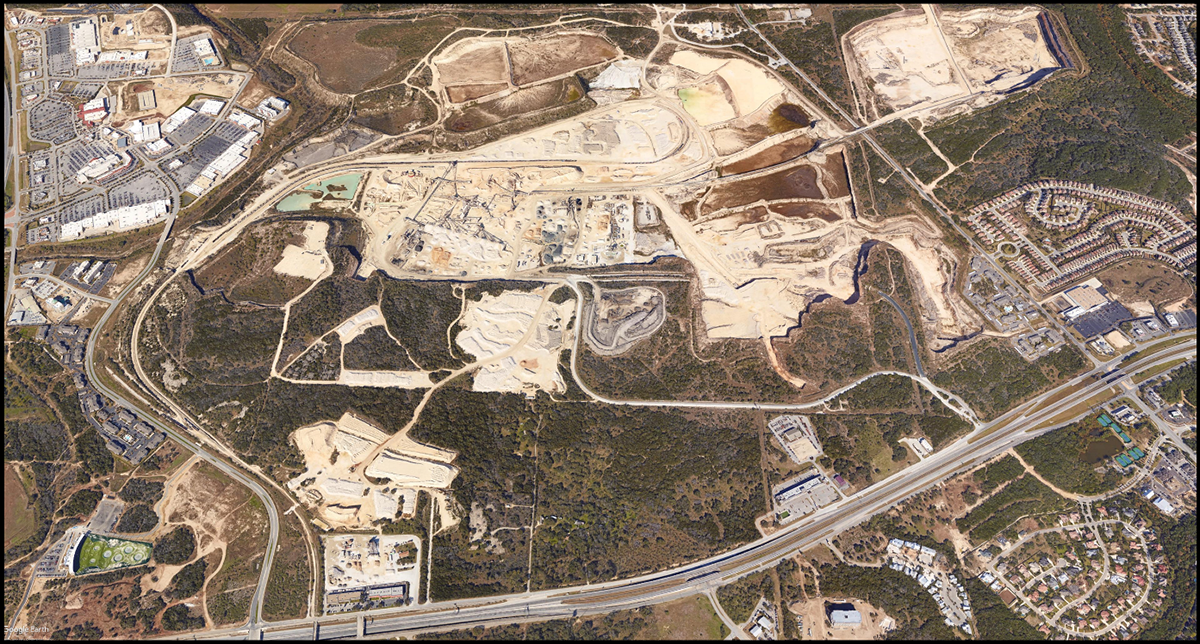 Beckmann Quarry is located in the northeast quadrant of the UTSA Area, north of Loop 1604 between The RIM and NW Military Highway. The majority of the site is an active quarry and is expected to remain as such for years to come. Quarry operations will not cease all at once, but instead are likely to subside gradually over time. The southeastern portion of the site has recently been redeveloped with multi-family and commercial uses, and future redevelopment is anticipated to extend from this area.

Redevelopment of Beckmann Quarry is seen as an opportunity to create a mixed-use center with incorporated public space, trails, and natural areas. The focus area would serve as a transition between the intense Regional Mixed-Use node at I-10 and Loop 1604, and lower density commercial and residential uses to the east. Similarly, development within the focus area would transition from lower intensity uses in the north and east near Eisenhower Park and Camp Bullis to more intense uses in the south and west along Loop 1064 near The RIM. The tallest buildings would be five to six stories, and would be built in the lower topographies; while higher elevations would be built out with two to three story structures.

Complete streets would be used to provide east/west connectivity between Loop 1604 and NW Military Highway. Multi-use paths would reduce traffic within the development and allow people to safely and easily walk and bike in the area. The development would incorporate access to and connections between the trail systems along Leon and Salado Creeks, and natural features would be preserved and highlighted as public amenities. Green buffers would protect the integrity of Eisenhower Park, and ensure military missions and operations at Camp Bullis are protected.

There is a pocket of industrial and service uses located in the southeast quadrant of the plan area, generally bordered by Loop 1604, the Union Pacific Rail line, and the Woods of Shavano neighborhood. Tradesman Quarry, which anchors the southern end of the area, is not an active quarry site but instead functions as a “clean fill” disposal site for other quarries. A significant number of parcels in this focus area are undeveloped. The remaining area consists of typical business/industrial park uses such as warehousing, distribution centers, professional offices and regional corporate headquarters, public service facilities, manufacturing and assembly, and materials suppliers.

Existing businesses are in stand-alone structures, rather than a large industrial park complex. There are a limited number of streets in this area and some are privately maintained. As these roads are privately maintained and designed without consideration of surrounding uses, there is a lack of connectivity within the relatively confined space. Additionally, if sidewalks are present, they are narrow, directly abut roadways, and are constantly interrupted by driveways. This type of design creates an unsafe and disconnected pedestrian environment. 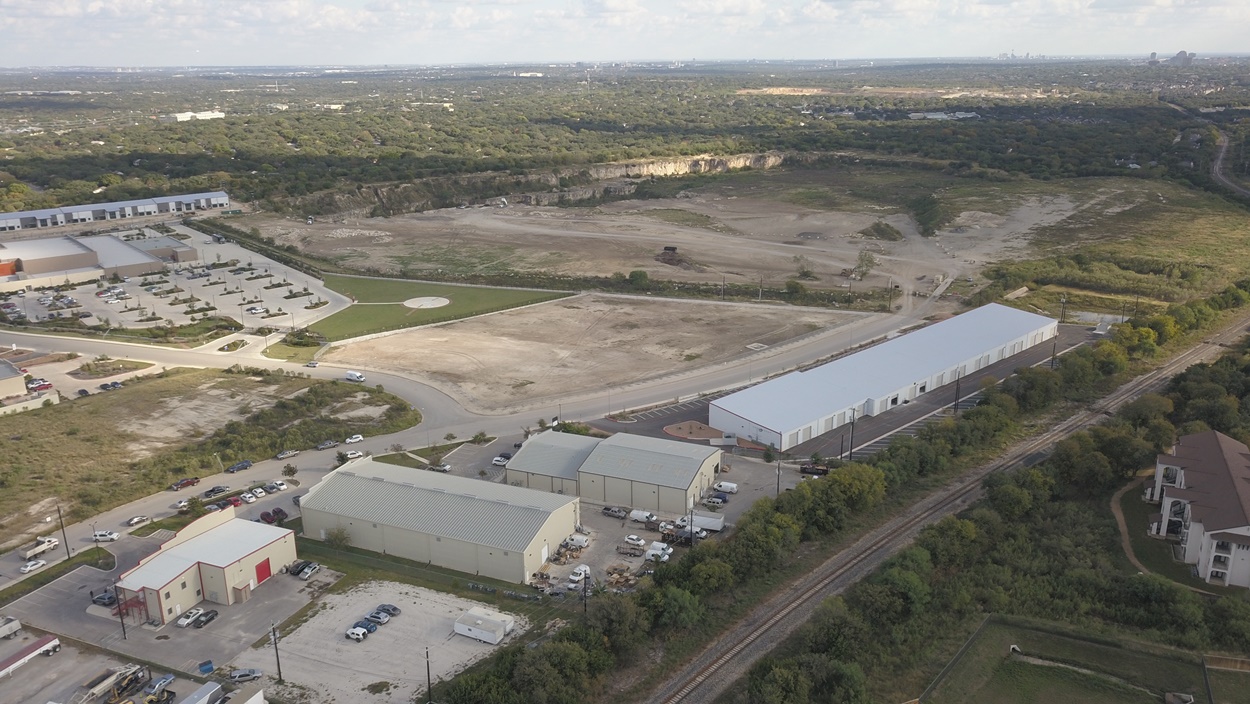 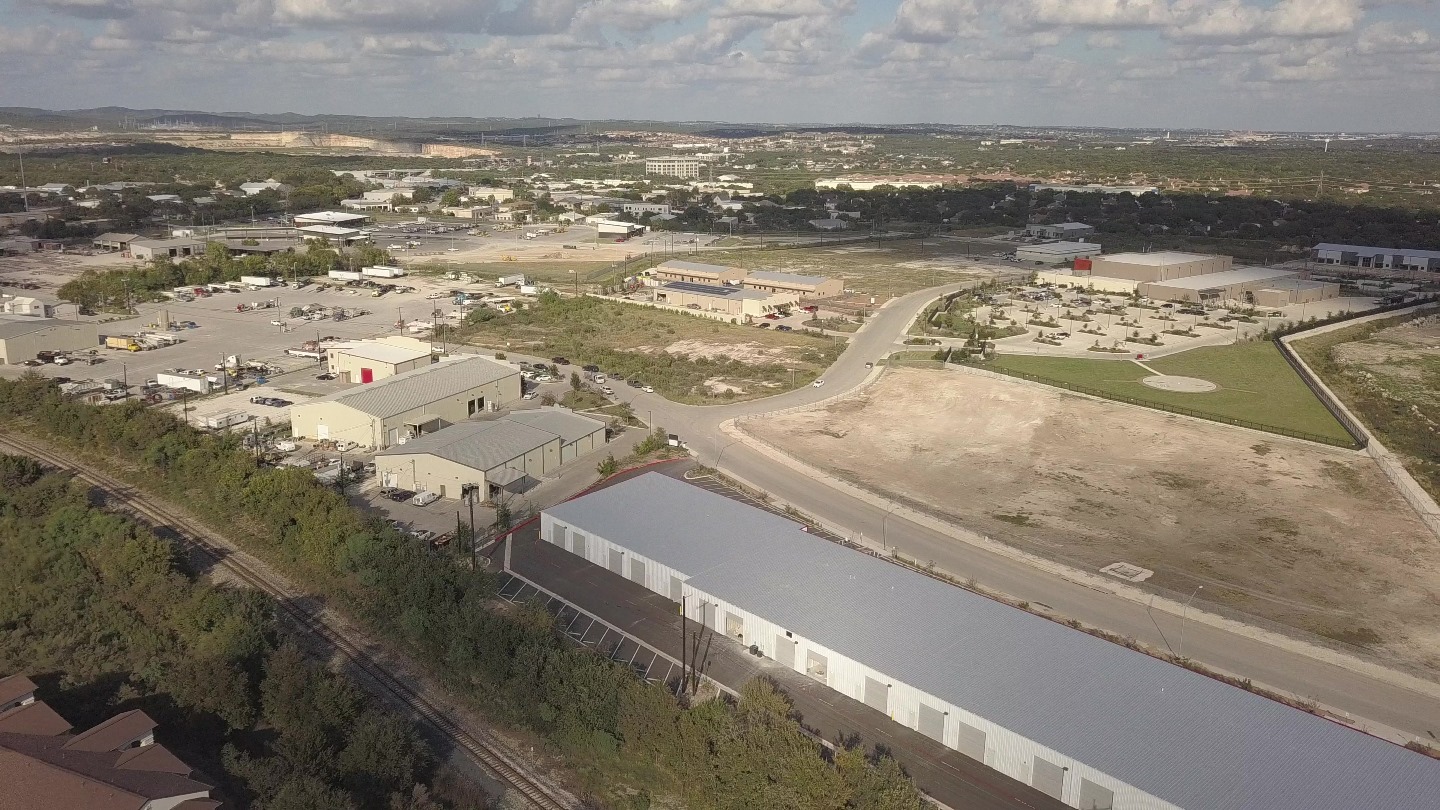 The community’s vision for the Tradesman Quarry and surrounding area is as a mixed-use “downtown” center surrounded by recreational open space and multi-use trails that will attract and are accessible to visitors and patrons from nearby residential areas. Land uses would include a mix of the light industrial and service uses that currently exist, but would also allow for adaptive re-use of older industrial or flex properties for creative work spaces, cottage industry or fabrication uses, limited-unit live-work lofts with apartments located above work spaces, as well as workforce housing in the form of condos and small apartment buildings.

Buildings will range from one to five stories, with the shorter buildings and lower densities providing a transition to neighboring single-family residential areas. The area would have a unique style, possibly featuring rail-oriented thematic elements as a nod to the adjacent rail line and the historic use of rail in the area’s quarries. The area also manages stormwater runoff on-site, decreasing the need for potable water use in native landscaping and protecting Olmos Creek from pollutants in stormwater runoff.

Within the UTSA Area Regional Center, UTSA Boulevard provides one of the few east-west connections across I-10. The corridor links the southern quadrants of the plan area, from the UTSA Campus to the employment and housing node that has recently developed along Vance Jackson Road and Presidio Parkway. The extended corridor created by UTSA Boulevard, Vance Jackson Road, and Presidio Parkway carries much of the area’s capacity for future mixed-use, transit-supportive development. 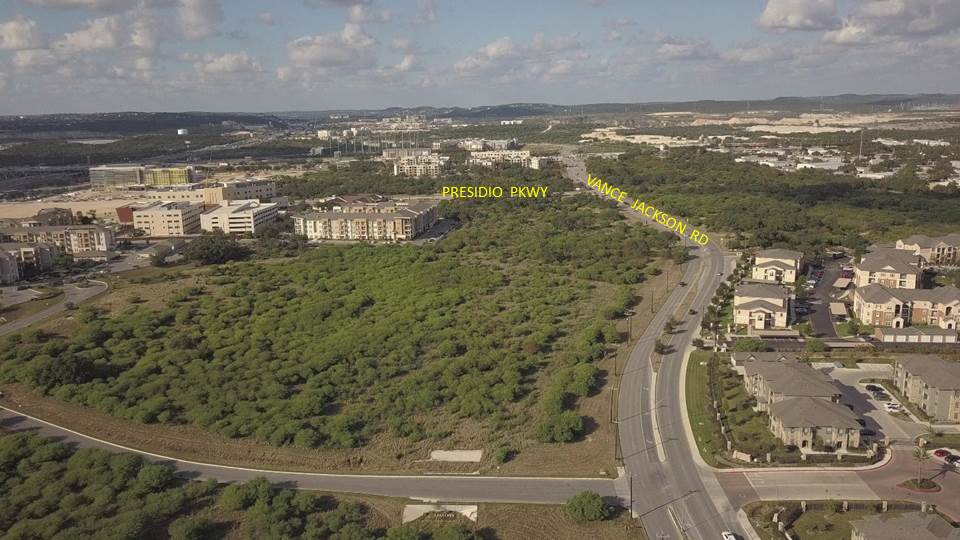 The UTSA Boulevard, Vance Jackson Road, and Presidio Parkway corridor will include a range of mixed-use and transit-supportive development. Complete street designs along the eastern stretches of the corridor, and streetscape improvements along the western segments would improve pedestrian and bicyclist experiences, as well as increase connectivity across I-10.

Mixed-use developments will complement surrounding neighborhoods, offering a mix of uses and densities that best serve the needs of each area. The UTSA Campus will accommodate taller, higher-density development with a wide range of retail uses. The southern side of UTSA Boulevard will include smaller-scale, lower-intensity uses that serve as an appropriate transition to adjacent residential areas. Trail-oriented development will showcase the area’s creeks and trails as celebrated features while protecting them with development setbacks.

Moving east along UTSA Boulevard and across I-10, the scale of development increases with proximity to the interstate, allowing greater building heights of four to six stories, as well as a broad mix of uses to serve nearby neighborhoods and regional interests. Increased access to transit and improved streetscapes make the UTSA Boulevard/Vance Jackson Road/Presidio Parkway-loop a walkable mixed-use center with easy access to jobs, homes, retail, and recreation. The east side of Vance Jackson Road marks the transition to medium density residential uses and building heights decrease to no more than three stories.

In addition to UTSA Boulevard, the Babcock Road and Hausman Road corridor carries opportunities for mixed-use development in the southwestern quadrant of the plan area. The corridor is crisscrossed with parks, greenways and trails, and the Maverick and Leon Creeks and related floodplains. Existing uses fill the spectrum, including vacant land, large and small-lot single-family subdivisions, apartments and student housing, as well as office, retail, and industrial uses. Although the uses are varied, one common element is a lack of interaction between the roadway and the development along it. 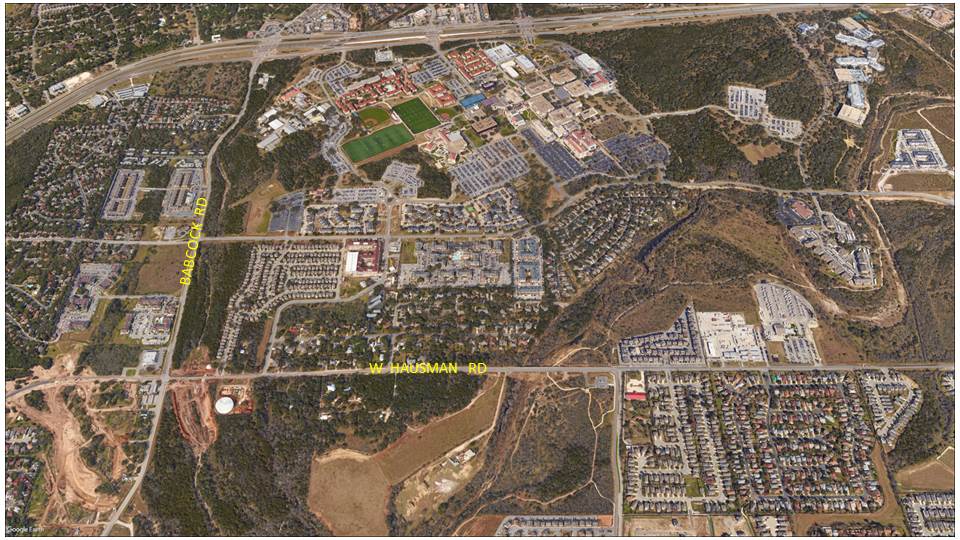 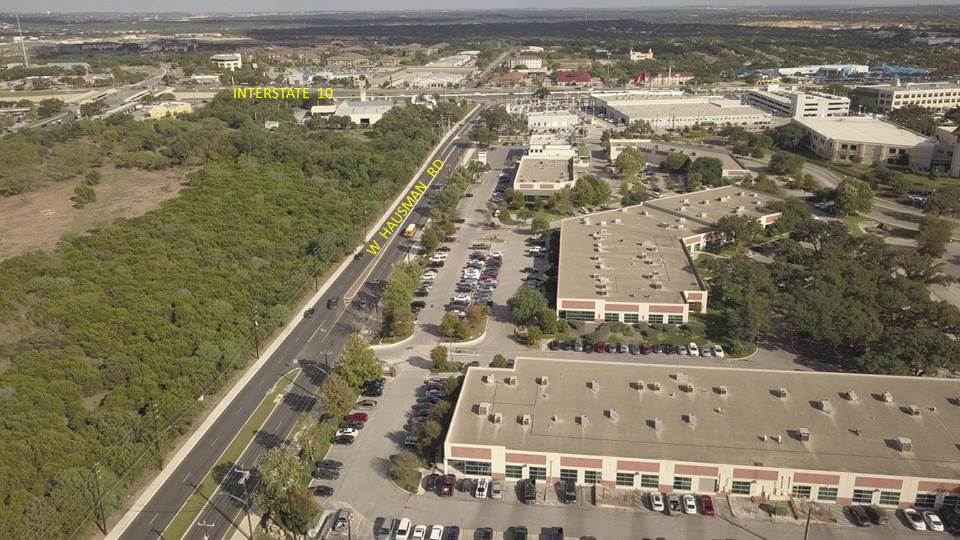 Hausman Road at i10

The vision for Hausman and Babcock Roads is that of a dynamic, mixed-use community that provides a variety of opportunities to area residents for living, working, learning, and playing. Pockets of infill and redevelopment will enhance existing service and residential uses, while incorporating creeks and floodplain buffers into their site design, creating and highlighting accessible natural features.

Buildings along the Babcock Road and Hausman Road corridors will be oriented to the street and feature amenities for residences and students that will create an interface between indoor and outdoor spaces. The scale of development shall range from one to three stories with respect to surrounding uses, with building heights lowering as they approach single-family neighborhoods. Parking facilities should consist of small surface lots tucked behind and between uses, with shared structured parking for larger developments.

In contrast to its current configuration prioritizing automobile travel, the Hausman and Babcock roads corridor should include expanded transit service, wide sidewalks and multi-use paths, as well as improved streetscapes with functional, native landscaped elements to provide safety, shade, stormwater runoff treatment, and comfort for pedestrians and transit users. These elements will encourage multi-modal transit along the corridors, which will simultaneously serve as traffic-calming features for automobiles. Theoretically, the culmination of these features will discourage vehicular traffic from using Hausman Road as a route to avoid the Loop 1604 and I-10 intersection.

Thank you for your feedback.